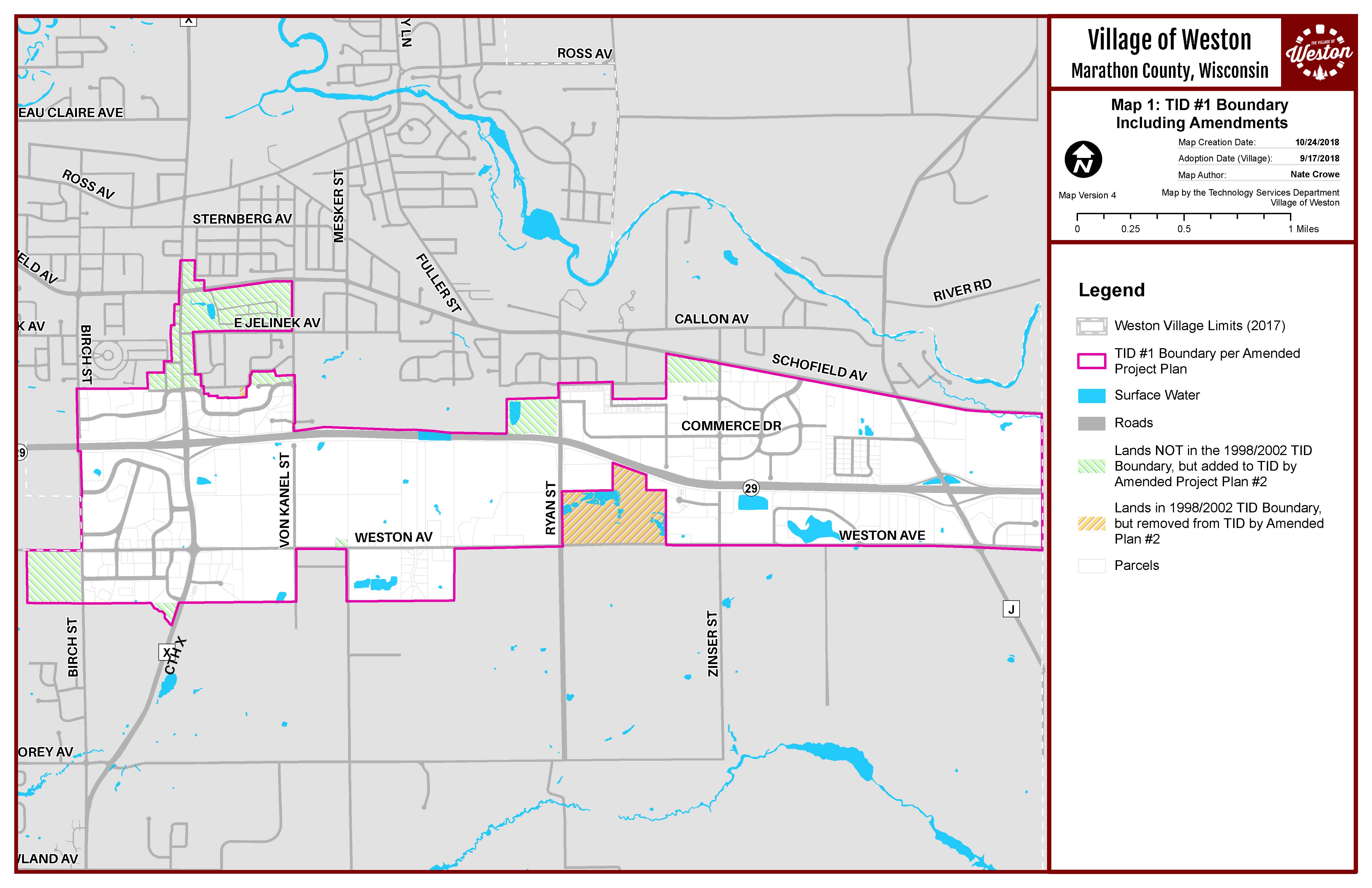 The Village established Tax Incremental District No. 1 (TID #1) in 1998 primarily to facilitate the orderly development of the greater State Highway 29 corridor within the village for uses designed to grow Weston’s economy.  TID #1 generally follows State Highway 29 through the Village, from Birch Street on the west to the eastern village limits on the east.  As established in 1998 and amended in 2002, TID #1 included approximately 2,211 acres.

There has been significant new private sector development within and assisted by TID #1 since its creation.  This includes, but is not limited to, the following:

These developments signal the success of TID #1 to date.  The village has targeted additional lands in and adjacent to the original TID #1 boundary for further industrial use, economic development, and redevelopment through a complete update to the Village of Weston Comprehensive Plan.  These include the 2016 Vision and Directions volume (Volume 2), 2016 Broadband Technology Plan, and 2017 County Road X Corridor Plan.  In particular, these plans suggest village support for further infrastructure investments, incentives, and other public actions to advance development and redevelopment along the County Road X corridor, in and near the 1998/2002 TID #1 boundary.  This includes the area generally between Community Center Drive/Barbican Avenue and Schofield Avenue, advised for mixed use redevelopment, and the “southeast quadrant” of the State Highway 29/County Road X interchange, advised mainly for larger-scale commercial development.  Planned development here has most recently been referred to as “Camp Phillips Centre.”

In 2015, the State Legislature amended the statutes in a manner that allows Weston to close TID #1 no later than March 2031, and a TID #1 expenditure period through 2026.  As of January 1, 2018, 21.58 percent of the village’s equalized value was contained in its two TIDs.  That same statutory change allowed the project plan for TID #1 to be amended no more than once, even those this percentage exceeds the normal limit for value within TIDs.

The village has since been developing and supporting plans, improvement programming, and other efforts to set the stage for the final amendment to the TID #1 Project Plan.  These have included a complete update to the village’s Comprehensive Plan,  the County Road X Corridor Plan, a blight study and draft redevelopment plan covering much of the same area , a development plan and discussions for what is now called the Camp Phillips Centre project southeast of the Highway 29/X interchange (pending).  These efforts have also included discussions among various parties including the Village Board, Plan Commission, Community Development Authority, and Joint Review Board through a 2017 meeting and another meeting on August 13, 2018. The outcome was the amended TID #1 Project Plan that was adopted by the Village on September 17, 2018 and the Joint Review Board on October 3, 2018. The Redevelopment Plan for Redevelopment Area #3 was approved by the Village on November 19, 2018.